The Kash Tap Rooms is putting on another beer based extravaganza this Bank Holiday weekend, kicking off 12pm Friday. The theme is ‘Forgotten Heroes’ and will feature those breweries that had their time in the sun only to be usurped by the next newer, shinier, hipper brewery. Expect the usual fireworks and cashmere moments, with thirty plus beers and awesome food.

Here are a few of the beers that have been secured so far.

Entry is free, and Kash will have the usual sinful burgers, dirty hot dogs and fries to die for.

You can register or just turn up 🙂

Chester Cycledom is a free and fabulously fun cycle ride around Chester. Don your finest vintage rodes and join us for a gentle bike ride ending with a nice cup of tea and a well deserved scone.

Following the sell-out success of their production three years ago, mayhem returns to the Forum Studio Theatre this week when “Fawlty Towers” comes back with three more classic episodes of the iconic TV series.  Who could forget the irascible Torquay hotel owner Basil Fawlty, his domineering wife Sybil – his “little nest of vipers”,  Polly the dependable maid and general assistant and Manuel, the tyrannised waiter from Barcelona, dogsbody and subject of frequent physical attacks by the demented Basis, are brought to life again in Chester.  Director Sally Anglesea has selected “Waldorf Salad”, “The Kipper and the Corpse” and the Psychiatrist” for the delight of audiences this May.  All three episodes are performed each evening bringing you a host of characters led by the ever popular Basil, Sybil and Manuel (“I know nothing, I am from Barcelona”).

Tickets available by phone on 01244 341296 or online at www.tiptopproductions.co.uk

Good for Nothing Chester is bristling with good intentions and singing up a Sunny Day in readiness for our first “24 hour hack gig” on 16th and 17th May 2014.

Our hack will start on Friday 16 May at 1900 when we’ll introduce the chosen Ventures (the good causes, the causes of the good), and they’ll talk through their briefs – brought to you by the letter F for food, farms and good old-fashioned fun.

Hey, back up the fun bus a minute. This all sounds good, but what’s it all about?

Why are we doing this? To bring sunshine, skills and talent to Chester’s cause-led innovators and change makers, to make Chester – and the world – the kinda inspiring place we want to live.

How will we do what we do? Talented, experienced and like-minded creative, tech and design folk will give their skills for free to answer our Ventures’ challenges.

What does the hack involve? Good for Nothing is a bit like a house party but with people doing good stuff rather than getting hammered. Music is a big part of the experience and so is great food and drink.

Where will it be? WM360, Merchant’s House, Chester

Our Good for Nothing friends have donated music, food and drink to keep all of you good people going for 24 hours, so watch this space to find out who to heap your love upon. All we ask is you bring your favourite childhood game.

Now sign up and pass this on to every talented friend know – especially any designers, developers & copy writers – via twitter #sunnyday @GFNChester #getyohackon. Not only will you feel warm inside, you’ll feel like the cat that got the cream…and the custard.

Alice, Holly & Dave (Chester Crew)
Ps Go on, you know you want to.

Highjinks at Chester Theatre as New Director Takes the Reins!

The cast of Tip Top Productions’ latest production, in rehearsal at Chester’s Forum Studio Theatre, have seen fun and April Fool’s tricks played upon them by their new director as they laugh their way through three more episodes of “Fawlty Towers”.

Sally Anglesea is directing her first play for the Chester company and saw no reason not to engage her own considerable acting abilities in convincing the cast that she and main character, and fellow deceiver Manuel (“I know nothing, I am from Barcelona”) weren’t seeing eye to eye, culminating in his “storming out” of rehearsals, to the horror of the rest of the cast. The joke was soon admitted and order was restored. Rehearsals have continued apace in the same jokey atmosphere which should culminate in brilliant performances.

Sally, a former pupil of Chester’s Queens School went on to graduate with a First Class Honours degree in English, Drama and Performance Studies from Salford University, where she realised her love for directing. She went on from there to Clwyd Theatr Cymru where she worked as Student Assistant Director for a project called “The Hub”

Looking for a new challenge Sally decided to take on Fawlty Towers which is certainly that, especially with the Forum Theatre’s “L” shaped staging which makes for unusual sight-lines. Directing three separate plays, in this case three episodes of this popular television series : “Waldorf Salad”, “The Kipper and The Corpse” and “The Psychiatrist”, is also no mean feat but Sally is enjoying it enormously.

Also enjoying rehearsals are Alison Pritchard and Dougal Fulton (seen below with Sally) who play Sybil and Basil Fawlty.

Alison hails from Tattenhall, has two children and has been acting for over twenty years. She loves acting so much that she even started the local Tattenhall Amateur Dramatic company , which she still runs. She has worked for Tip Top previously in Gail Young’s “Cheshire Cats” and is finding the Fawlty Towers experience to be great fun.

Dougal comes from Wrexham and has been involved with many Tip Top productions including musicals such as Godspell and Carousel and has appeared more recently in the Company’s productions of Useless Beauty and The Sociable Plover.

Hats off to Mike Devoy and Telfords for pulling together a unique festival. Don’t imitate, originate..

Austin Wilde’s book is launched this month, so I thought I’d dust off this post about the story behind his book. Enjoy

This post originally appeared on Schotts List, but I thought it deserved a run-out on here too. Enjoy

I have a white dog and a beard.

That’s the message I received moments before I met Austin Wilde. For some reason, I just knew I was going to like him.

Austin Wilde moved to Chester to write a novel about London. Chester also had the advantage of being closer to his family after the loss of his father, itself the catalyst for his writing. It was his way of coping with grief, understanding mortality. This cathartic exercise gave birth to a book, entitled My Dad’s Deader Than Your Dad: a fanzine for death, written for the individual generation that fetishizes the new over the now. The accompanying blog secured him a London agent and interest from Faber & Faber. But the book never came out.  Most importantly, perhaps, this…

Ex-Chester Culture blogger Andy Tabberer is working on a beer book that captures the essence of beer. What do you think?

I’ve teamed up with an illustrator chap called Matt Jeffs to create a new type of beer book. Instead of the usual dry technical descriptions, the book focuses on capturing the essence of beer. There will be 52 beers in total – one for each week of the year – each with a jaunty description or vignette, along with a lovely illustration. The book has the rather natty working title *#beerwithoutfear*. Here is an example entry. We’d be interested to hear what you think. 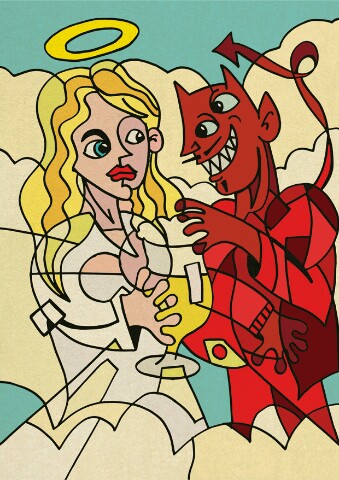 Cast from Heaven, the Devil fell to earth. He landed on his feet, he always did. He smoothed out his robes and began to think. He should teach the Big Man a lesson.

A germ nudged a spark that liberated a thought. He should turn Mother Nature against God, using her earthly gifts to create a poison…

My Tweets
Join 10,403 other followers